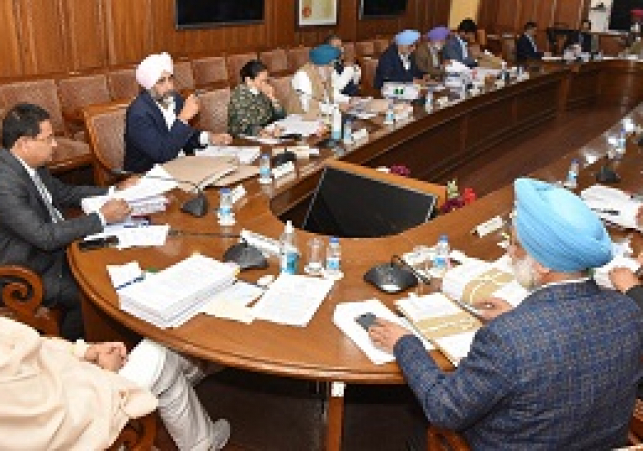 A decision to this effect was taken during a Cabinet meeting chaired by Chief Minister Charanjit Singh Channi here at Punjab Bhawan this afternoon.

According to a spokesperson of the Chief Minister’s Office, the Brick Kiln Owners shall apply for license as per Form ‘A’ and obtain the license in Form ‘B’ for this purpose. Whereas, the excavation is done beyond above specified limits, the case would be dealt with the prescribed Punjab Minor Mineral Rules (PMMR), 2013 as well as prevailing guidelines. This will ease the process to operationalize the brick kilns besides ensuring the uninterrupted supply of bricks to the consumers at affordable price.

Notably, the various representations have been received from the Brick Kiln Owners of Punjab for declaring the excavation of Brick Earth as Non Mining activity. The Brick Kiln Owners in the representations have highlighted the field problems i.e., obtaining Environment Clearance is a time-consuming process, land owners do not allow their land for excavation of earth from their fields for long term as they have to sow the crops in the fields and the work of brick Kiln is operative for six months only during the year.

DOMESTIC ELECTRICITY CONSUMER TO GET BENEFIT OF REDUCED TARIFF FROM NOVEMBER 1, 2021

In another significant decision, the Cabinet also decided to give huge relief to the domestic electricity consumers having sanctioned load upto 7 KW by reducing electricity tariff rates by Rs.3 per unit w.e.f. November 1, 2021 instead of earlier December 1, 2021. This decision would involve annual financial burden of Rs. 151 crore on the state exchequer thus benefitting nearly 69 lakh out of 71.75 lakh domestic consumers with the reduced tariff.

Acceding to the consent of the management of the Government Aided Private School, Public High School Kukarpind in Jalandhar district, the Cabinet has given a go ahead to take over the School by the State Government in the public interest along with all the assets. The sole employee who is working against an aided post in the School will be regularized in the School Education department against a vacant post.

In view of the difficulties faced by the students and demand of the local people, the Cabinet also decided to take over Janta High School, Phuldiwal in Jalandhar district (Private School affiliated to PSEB) which had remained closed since year 2008. Resultantly, the students of the region have been facing various hardships as there is no Government School in the vicinity of this School, which is currently under the control of Village Panchayat Phuldiwal. The said schools would be taken over by School Education department along with all the assets from the Gram Panchayat to make it functional up to the High Level.

The Cabinet also decided to facilitate regularization of standalone buildings i.e. Educational, Medical, Commercial, Farm Houses, Religious, Social, Charitable Institute which were constructed without the prior permission of Housing & Urban Development department outside Municipal Limits, Urban Estates and Industrial Focal Points on "as is where is basis" by taking regularization fee. The applications can be submitted for the said purpose till December 31, 2022 by paying the requisite fee which has been now reduced drastically.

In order to ensure quality healthcare services to the people of the State, the Punjab Cabinet also approved the creation of 76 new posts of various cadres for the 25 bedded hospital built in the name of the legendary martyr Shaheed Havaildar Ishar Singh (Saragarhi Post Commander) at Village Jhorda in Ludhiana district besides Sub-Divisional Hospital Sri Chamkaur Sahib in Roopnagar district and Community Health Centre Banga in Shaheed Bhagat Singh Nagar district to Sub Divisional Hospital.

The Cabinet also gave approval to the annual administrative reports of Industries & Commerce department for the year 2018-19.